The Morning After The Good bye, Vol. 1

Imran woke up at 5.15am on the dot for the morning sahur. He sat at the edge of the bed, his eyes adjusting to the lights. Immediately as if on cue, his thoughts goes back to her. He would've texted her to bid his salam and good morning and to ask what's for sahur on her side. Sometimes she'd reply almost immediately, more often than not it would be towards the later part of the morning. Either way, he enjoyed the anxiety that comes with waiting for her reply.
His brother popped his head at the door and asked him whether he would to have sahur. He nodded and signaled that he would be joining him soon.
He then reached for his phone, scrolled the message and silently wished to see 'Assalamualaikum and g' morning Imran ' but he knew it will not be there.
I miss you, my friend.
Imran walked out of his room to join his brother for sahur...
Posted by NLN at 6:43 AM No comments:

The Night After The Goodbye, Part 1

Imran stared again at the screen.

Arrived in KL. Thanks for the crumble. Sedap!

It must have taken her close to 5 hours plus to reach Hentian Duta from Sungai Petani. Traffic must be quite light, he said to himself. He put down the phone and went to the kitchen. It is after all about 15 minutes before maghrib and he happens to be fasting today. While unpacking the mee goreng he bought earlier, his mind began wander about the how during ramadan they would be exchanging messages and updating each other on what dish they had for the buka.

It dawned upon him that he misses her.

Thanks to the driving skill of his brother in his trusted Kancil EXi, he managed to arrived there in the nick of time.

Imran alighted from the car and thanked his brother profusely. His brother smiled and motioned him to quickly do what he intended to by coming here. The express bus terminal at Ukir Square, located by the UTC Sg Petani stood before him. He made his way to the teminal and started to scan the area for the bus she told him she would be taking. Various buses of colours and destination near and far were parked waiting for their passengers to board. After a few searches he finally found the double decker Cosmic Express, emblazoned in a fiery red livery, bound for Kuala Lumpur.

He scanned the passengers around and couldn't catch the sight of her. The passengers haven't started boarding yet so it is easier to look for her among the crowd gathering around the bus. Doubts started to crept in. Did he get the right bus company ? Is it the right departure time.

He had said his good byes over the phone. Messages, call and all. There was nothing unpure about. It was friendship at its best. He harbored no ill intention or any unpure thoughts. He just enjoys being a friend to her.

A chance meeting while taking the same train back to SP rekindled an old friendship that dated back to the old Maktab days. After exchanging numbers, they bade farewell to their respective house and didn't thought much about it.

Until of course when the MCO started to kick in and with not much opportunity to venture out, he started to contact her via Whatsapp. What started as hi and bye became full fledge conversations just about anything under the sun. Never has he felt so comfortable being with someone, as a friend no doubt, like he feels with her.

The announcement for passangers bound for KL on Cosmic Express blared over the intercom. Passengers started to queue up but she is still not in sight. Suddenly, he felt a gentle tap on his shoulder. He turned around and there she stood before her, smiling and asking him in a bewildered tone.

"What are you doing here, Imran? You didn't tell me you are coming to send me off?"

He felt so relief at the sight of her. "I wanted to say a proper good bye to you. I also want to thank you for the best 80 days and 79 nites I have had, with our talks and chats. It wouldn't be proper for me to not say to you in person."

Her smiled grew wilder. "Thank you too, Imran. I thoroughly enjoyed it too. All those stories, chats and anecdotes. Definitely a thing I won't forget for a long long time. Funny that we weren't this close in our school days, kan? Imran, I do have to go. My bus will leave without me nanti"

"Sure, I know. But nah, here's something for you.Bekal for your bus ride. I did promise this kan"  He handed her a tupperware which he has been carrying since he left his house.

She looked surprised and asked,"What's in this?"

"Well, once you are in the bus, take a peak. Apologies in advance if tak sedap, hehehe"

"Will do. Imran, I need to leave. I'll text you once I have safely arrived. Insya Allah, when you are next in KL, do not be a stranger ok?"

"Ok, have a safe trip..take care. Enjoy the thing I gave"

As the bus departed the terminal, she put the tupperware on her lap and took off the lid.

She smiled her sweetest smile.

Contained in the tupperware is a freshly baked Apple Crumble ....

I can't remember the last time I was at the National Library; it must've been during my PPP/ITM days so that's about 16 years ago.
I somehow mixed up my appointment time, leaving me with 2.5 hours to spare. With the exhorbitant parking rates in KLCC area, I decided to find either find 1) a free place where I can park my car and use my laptop or 2) a place where parking for two hours won't cost me more than my lunch. I decided to drive over to the National Library and with its ample free parking, decided that this would be a really nice place to spend two hours and catch up on my work. I registered myself here and maybe the next time I am in KL for a meeting, I could always drop by here and read.
p/s To the anonymous MCOB who commented on my earlier posting on my English, I would really appreciate it you could contact me at azlan@mcoba.org. I would certainly like to improve on the quality of my posting and I am sure you could help me with that.
Posted by NLN at 10:33 AM 2 comments: 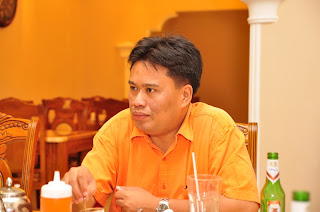 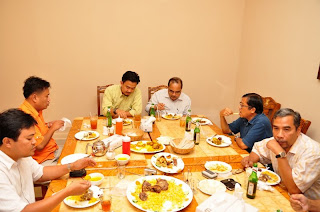 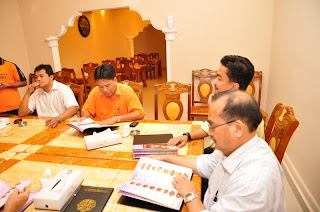 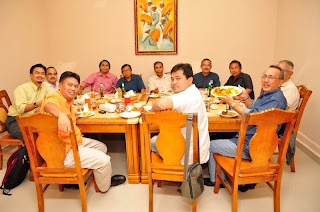 Sdr Salim '75, MCOBA JPM for Networking started a very interesting activity to promote MCOB-owned eateries via the Jalan Jalan Cari Makan (JJCM) series. Each time, one MCOB-owned is chosen and everyone would eat their heart out and go dutch on the final bill. I missed the first three but managed to join the fourth installment at Al Andalus Restaurant, Jalan Delima, KL.
Pictures courtesy of Sdr Zahid Serpent '78
Posted by NLN at 12:24 PM No comments: 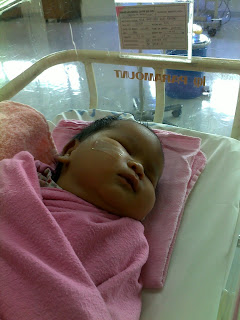 On this magical date, my second son, Amir Zharif came into the world at 8.57am, tipping the scale at 4.93kg.

Zharif outweighed his elder brother Amir Haris by more than 300g and also outgrowned him by 1cm.

However, we were put through a very anxious two weeks as Amir Zharif was detained at the hospoital; one day in the NICU and the rest in the 3rd floor nursery.

Cause : Fast respiration from birth.

All sorts of test was done on him, but Alhamdulillah, the doctors gave him a clean bill of health.

Welcome the world, Son.. and welcome to the family.
Posted by NLN at 6:20 PM 1 comment:

In 14 years, a lot of things have changed.

In '96, when I first registered at UW-Madison, the business undergraduate programme was ranked #13 in the US.

Money Magazine named Madison as the #1 city to live in.

Get this.. China Press reported that Macau's Gambling King, Stanley Ho sent his personal jet to pick up 88 durians from Singapore. Talk about love for the King of Fruits.

Now, get this. The durians are from the Musang King variety, FROM MALAYSIA...

... why must he buy Malaysian durian in Singapore ?

It was reported in the news that Malaysia would consider a joint bid with Indonesia to host the World Cup.

Our team is languising in the 100s ranking. Before we can even consider such ambitious undertakings, please get the team's ranking to at least the top 99 ranked.
Posted by NLN at 10:46 AM No comments:

I am not a die hard soccer fan. I do not go ga-ga over EPL matches at mamak stall and sometimes I think our local newspaper are going overboard when reporting 3/4 of the sports section with EPL or other European league news whereas our own league is lucky enough to get 1/4 page of report.

Anyway, befoe the World Cup started I made my mind to support Argentina. Except for Messi, I don't even know who is on the team but hey, with everyone talking about "their" team, I must have one too. Argentina did rather well, until of course, the famous drubbing by the German team.

OK, lets support a better team (i.e the team that beat Argentina) but hey, even Paul the octopus is not putting his tantacles on that.